EC Smokes Has a Great Variety of ECigs 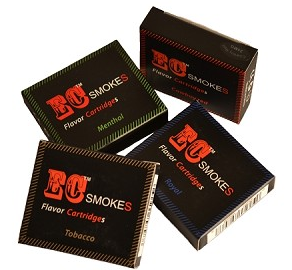 For many years now, since new medicine and new science has discovered just how unhealthy smoking is, smokers have been trying to find ways to quit. Not only has it been shown to make people sick, it is also costly. Depending on where you live, name brand cigarettes can cost upwards of $10 a pack! Unfortunately, many ways that smokers have tried quitting are just unsuccessful. Nicotine is addicting, making it very difficult to break the habit.

Electronic cigarettes are the newest way to help break the smoking habit and it has been catching on quickly, although it depends on which type you choose. When they were first introduced into the market, they were marketed strictly as a tool in the cessation of cigarette smoking. Now, however, there are quite a few that are being used simply as a cigarette substitute because they are cheaper and can be smoked in public places, where normal cigarettes cannot be. Some are made to look and feel like cigarettes, while some have no resemblance at all. They are able to be smoked in public, nonsmoking places because there is no secondhand smoke; some models boast the feel and appearance of smoke by emitting water vapor. It gives the smoker the feel that they actually are smoking, but they're not doing the harm that the conventional cigarette would.

EC Smokes offers a variety of different options for those looking into giving this method of quitting a try. There are basic starter packages, premium starter packages, refill options and even a step down package. The electronic cigarettes offered on this page contain small amounts of nicotine, which is what the step down package tailors to. Start off with the larger nicotine dosage and work your way down until you can eventually go without. Or, just choose the amount of nicotine you want to use.

Since these cigarettes are electronic, they run on batteries and are rechargeable. Instead of going through several cigarettes, you can simply switch out the flavor cartridges as you want. They have a variety of flavors to choose from, some you wouldn't even think of, such as Tobacco Light, Menthol and Cowboy Red (the full flavor option). If you're interested in something a little more tasty, there are more fun flavors, such as vanilla, coffee, and chocolate. There's something for everyone on this site, all with the goal of helping smokers quit and become healthier*.

*The FDA has not evaluated the safety of Electronic Cigarettes.
Posted by Joe at 5:38 AM